It just takes one person to change another’s life. Be that person. The one willing to defend another from being bullied. The person that gives a compliment to a stranger, because they seemed sad. Be the one that is brave enough to go against the grain, standing up for what is right.

For Ana Barbara Ferreira, a teacher in São Paulo, Brazil, she decided to be that one for one of her students. One morning, Ana noticed that one of them was being bullied and mocked by a peer, because of how her hair looked. Later that day, Ana Barbara Ferreira posted the following on Facebook in regards to the incident:

“Yesterday, my student told me there was a boy saying that her hair was ugly. She was very sad,” Ana wrote on her Facebook page. “At that moment, the only thing I could tell her was that she was wonderful and shouldn’t care about what he was saying.”

She was able to offer her student some sound advice, such as another’s opinion of us truly does not matter.  To Ana, that just wasn’t enough though, she felt compelled to do more,  which is precisely what she did.

The next morning, before returning to school, Ana styled her hair just like the student that was being mocked the day before. As soon as she laid eyes on her teacher, and her new hairdo, her world simply lit up!

“When she saw me, she came running to hug me and say that I was beautiful,” wrote Ana. “I told her, ‘today I’m beautiful, like you!’”

It’s amazing how we tend to overlook our own beauty, only to then see it for ourselves, when it is shown in the image of someone that we admire.  Equally amazing is just how valuable these ‘little things’ truly are in the end. 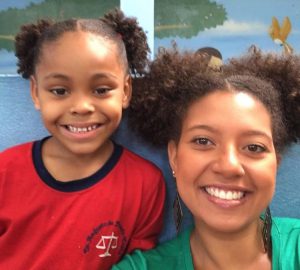 It’s a hairstyle, yes, but to her student, it meant so much more.  It became a representation of her own beauty. It became validation, that there was somebody listening to her when she voiced her concerns. It signified the fact that she had somebody to be that one, for her.

In the Face of Tragedy, Look For the Helpers #RoomForManchester