Gale force winds coming off the Pacific pushed cold and damp through Judy Crawford as if she had no skin. The hot crack pipe high inhaled hours earlier had sent her up and away for while, but now she spiraled down. With her infant son she took refuge, teeth chattering, muscles shaking, and a cold hell breaking loose in her mind. “I need to get warm,” she silently screamed, as a wall of her cardboard home ripped off and blew down the block, away from the Golden Gate. She glanced down at Tantrell, her soundly sleeping three-year old, paced up and down the block, and waited for dawn.

An early morning sun warmed them a few degrees and shone a bright light on their world. Judy’s sister, who had invited her to San Francisco from Milwaukee–where Judy was on a one-way path of self-destruction–with hopes of her getting clean and taking care of Tantrell, now saw her only when Judy needed money. She was sickened by Tantrell’s condition, as were the hundreds of daily passers-by who stepped over Judy, as she slept through a crack crash on a filthy city street. Finally, enough people had seen enough and authorities were called. They found Judy and Tantrell on the corner and took a screaming baby boy from the only face he really knew; he was too young to know it was only a mask. As he was placed into the State of California Child Protective Services vehicle and driven to a hot meal and warm bed, Judy fell to the street, buckled by reality.

On the day she left her past, Judy woke up alone, beaten down, and without her child. She needed help and sought grace to change from a life in which her baby had slept on the street and living seemed to be the second best option. She found salvation personified in the form of Martha Ryan. 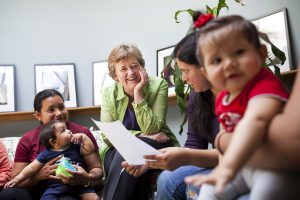 Martha Ryan (left, in green jacket) was born in the Bay Area, one of 13 children raised in a poor Irish Catholic family. In her early 20’s she moved to Africa, where she worked as a nurse, educating the women of small villages in Somalia about preventive health care. It was there that she had indelibly stamped in her the belief that a true community approach to health care was most effective. In the late 1980’s Martha moved back to the U.S. to earn a full nursing degree.

While volunteering at a local community health clinic she came to know pregnant homeless women. Martha noticed how priorities quickly shifted among most pregnant women, from focus on getting high to trying to get straight. “I realized the state of pregnancy was a wonderful window of opportunity for a woman to turn her life around,” explained Martha. “They needed more than just prenatal care. They needed housing. They needed help with addiction. Some needed to get away from a batterer. They had lived their lives in poverty, and they needed help to overcome these barriers. I knew that regardless of how it happens, people who are born into poverty or raised in poverty have fewer opportunities than those that are born into a family of means.” Martha set her intentions: to create a program and open a center that helped homeless pregnant women experience a healthy pregnancy, gain self-esteem, and build a good life for themselves and their children.

Martha’s heart had long been in a right place as a nurse who sought crises in Africa to share her knowledge and care for others, before returning to the states to finish her formal education. “I used to wonder why I would work all week and then volunteer at a local clinic on my day off, but I always left the clinic inches off the ground,” explained Martha about her desire to help others. “When people volunteer and give they feel so much better. It is so easy to cast judgment on someone that you don’t know. And if we could just not do that and accept people for who they are and be nice and kind and give a helping hand, we’d feel better about life and so would everybody else.”

With expert advice from fellow medical practitioners, social workers, and the sponsor of a grant she applied for and received, she started the Homeless Prenatal Program in 1990. Since its inception, Homeless Prenatal Program has placed over 3,600 families in permanent housing, meaning over 10,000 children and their parents are no longer forced to endure the hopelessness of homelessness. These days nearly 200 new families seeking help come to Homeless Prenatal for the first time each month. Homeless Prenatal has counseled thousands of mothers and fathers out of the world of drugs and into work. Its staff has allowed countless children to be born healthy and into a world of hope. And they have done it by helping one homeless mother at a time. 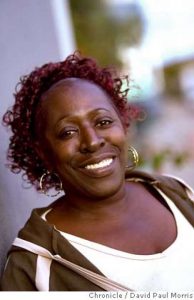 Martha’s actions changed Judy Crawford’s (left) life. “I was an addict for years, and could not escape that cycle,” explained Judy. “My son was taken from me by the State and placed with relatives. I got arrested. I spent a lot of nights out in the cold. I remember many, many times just walking back and forth, all night, waiting for the sun and for it to warm up.” After she hit bottom, she sought redemption. “I am not proud of that time, but I came through it. I found Homeless Prenatal and got turned around.”

Today, Judy is a full time counselor at Homeless Prenatal and is raising a healthy teenage Tantrell. “Martha and the staff just listened to me when I first showed up, and now I just listen,” explained Judy. “They cared, and they gave me hope and ideas. That is what I do now, being on this end of things and knowing what it is like without someone who accepts you and really tries to help. My life was saved so I can give back.”

Is Apple on the Verge of a Revolutionary Medical Breakthrough?